On Sunday the 18th of April, the news broke that twelve football clubs from England, Spain and Italy had agreed to take part in a new ‘European Super League’, which would work through two groups of ten teams, followed by a play off phase. There would initially be fifteen ‘founding teams’, however Bayern Munich, Borussia Dortmund and Paris Saint Germain declined to take part. The other five teams would be made up of European teams on a merit qualifying basis.

These plans, however, would not last long. After quickly being condemned by almost every European footballing body, including UEFA, the FA and the Premier League, as well as intervention from Prime Minister Boris Johnson, by Tuesday evening clubs were beginning to jump ship. With Manchester City being the first, and closely followed by Chelsea. By Wednesday all 6 Premier League clubs involved had dropped out as well as Atletico Madrid and Inter Milan, leaving just four of the initial 1 remaining.

But what sparked such a hasty exit from something that had clearly been in the woodwork for a while? It was undoubtedly the combatant approach from football fans across England. On Monday evening there was a protest held at Elland Road, just before the Liverpool v Leeds game, where the protestors were made up of fans from many clubs to protest against Liverpool’s decision to enter the ESL. Similar protests were taking place at stadiums across the country, with angry banners being hung by fans at Anfield, The Emirates, and Old Trafford, to name a few. Roars of ‘We Want Kroenke Out’ could be heard from Arsenal’s Emirates stadium, with similar outcries of Manchester United’s famous ‘Glazers Out’ chant being heard from outside Old Trafford. 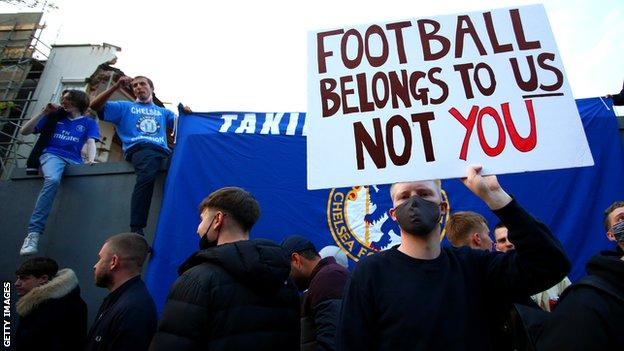 We have perhaps never seen fans as mobilised as this on one united issue, however the question to ask now is whether or not fans will choose to forgive and forget, or whether this is the catalyst for reform of the beautiful game in England that many fans have been waiting tentatively for. In all honesty it will more than likely be relative to the club – Manchester United fans have already won a war with the resignation of Ed Woodward, in a long battle of strained relations between owner and fans. However it is a different story for those who have stronger owner/fan relations. I doubt we will see calls for Abramovich or Sheikh Mansour out, the way fans are crying for the Glazers and Kroenke to go.

Since the collapse of the league, last Sunday’s match at Old Trafford for Manchester United v Liverpool was postponed due to fans charging onto the pitch in protest of Glazer ownership. 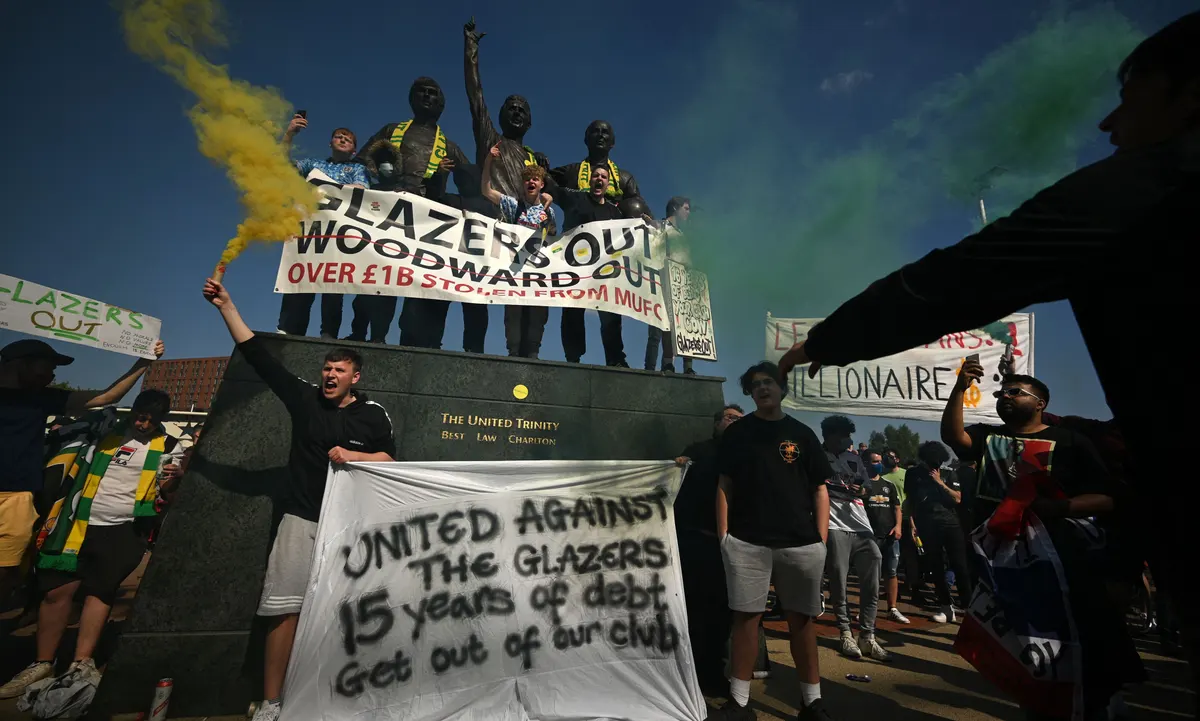 But what will all this unrest mean for the future of football ownership? Do fans want more influence in how their clubs are run? Do they want a German 50+1 shares model introduced? Kieran Maguire, expert in football finance at the University of Liverpool, thinks that the model will never work here, instead ‘some form of golden share, or some form of veto that fan groups could be given’ would be a more effective choice. He also discussed some sort of ‘mandate from government’ in the show with us, which can be listened to below.

Despite the collapse of the league – the role that the ESL will play in the future of football can not be understated. Looking back now, at the weeks of unrest that have come since, this may be the turning point of social change that fans of teams such as Manchester United, have been waiting for.

A special episode of the Politics Hour covering all things Super League can be listened to here: https://youtu.be/a5zpWRfERGg